A lovely little brown bat has taken up residence under the metal sheeting covering the roof. I’m pretty sure it’s a momma with one or two babies. At first I thought birds were nesting somewhere up there because I could hear high-pitched chirps, but didn’t see any place good for a bird’s nest near where the sound was coming from. 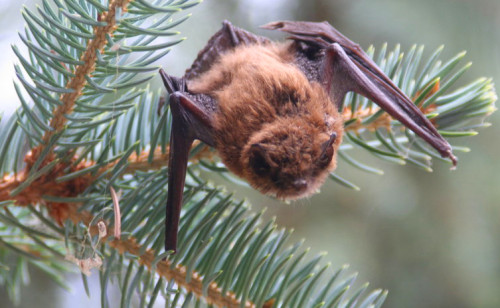 A couple of days ago I fired up the grill and smoke wafted up toward the roof. Chirping got more frantic, and momma bat poked out her head from the tiniest space, then took flight toward the trees. (Photo above not mine but looks like my bat — courtesy of The Sandvich). I continue to hear chirping, so she must be back. The mosquito population around the deck is also way down compared with last year. If the bats are responsible, they are more than earning their keep in the roof.

I can’t say the same about the seemingly endless parade of deer mice in the shop. Deer mice are cute to look at, and I wouldn’t mind a little tidying up after them every now and then if they would just find a cozy corner to make their home and leave it at that. As it is, they are amazingly destructive given their tiny size, and manage to get into everything that’s not hermetically sealed. 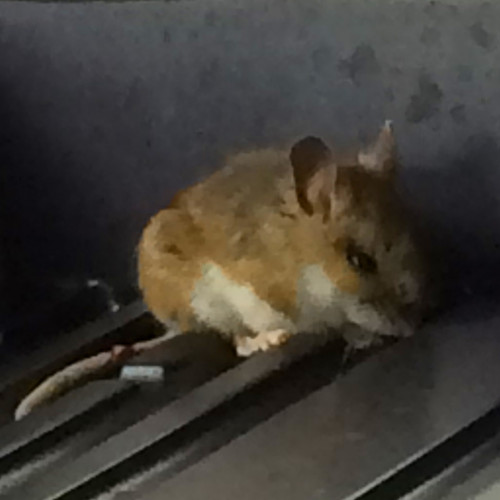 Some are also carriers of the Hanta virus, which is deadly to about 40% of humans who get it. Even though we’re far from overrun with mice, the few that are around have chewed through wires supplying electricity to the sockets in the office upstairs from the shop, chewed holes in the baseboards, and chewed through tissue boxes stored in the shop to find nesting materials, among other destructive activities.

A week ago I trapped what was likely a momma mouse given that I’d captured a couple of babies in the zap trap not long before. Five days ago I went into the shop early in the morning and was greeted by another baby mouse no bigger than a quarter. When I first turned on the light, it scurried for cover. A few seconds later, it ventured out and started to slowly inch toward me curiously, sniffing the air. I re-baited the zap trap and caught the baby a few days ago. 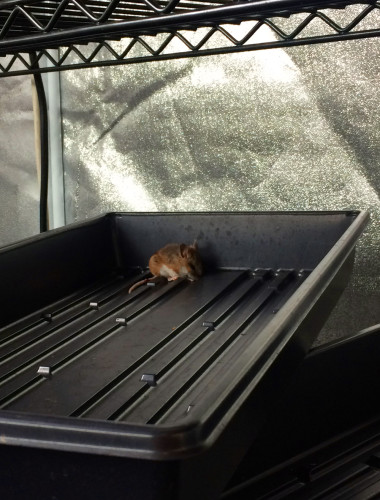 I didn’t see any signs of mice again until this morning when I went into the hothouse and found a little guy with an injured tail curled up in the corner of an empty seedling tray. The mouse was just below the vent fan, so I’m thinking he made his way into the hothouse through the 6′ of duct hose, into the vent fan, and the vent fan (which is operated by thermostat) probably turned on just as he was about to to go through. His tail was cut, he was breathing rapidly, and seemed traumatized.

I got him to crawl from the seedling tray into a deep plastic jar and carried him into the woods. Not sure if he was the final baby mouse or another entirely. They grow pretty quickly. Typically the mice seem to come one at a time – momma mouse excepted. I trap one, don’t see any droppings or other evidence they’ve been around for 3-10 days, I start seeing signs again, and the cycle repeats. Not sure what the best solution is to get rid of these guys.

The shop does contain stored food, but all of it is either canned or in a mouse-proof container. There are no unsecured food sources in the shop. We’ve searched the shop from top to bottom, and every hole we found has been sealed. Neighbors suggest a barn cat, but from what I’ve heard there is no guarantee the cat you get will be a mouser, plus the dog hates cats so I’d have to keep them apart, and I’m allergic to cats so it wouldn’t get much attention. Others suggest poison bait. I’m concerned about the dog getting into the bait, the mouse dying inside somewhere inaccessible, and/or owls, fox, or other wildlife eating the poisoned mouse. Continuing to trap seems like the best option, along with continuing to mouse-proof anything useful for bedding and taking away as many hiding spots possible.

Under the deck there lives another, unidentified, critter. Likely the size of a skunk or racoon. I hear it rustling around, but so far have not seen it. As long as it’s not destroying property or bothering anyone, it can stay. We see moose, fox, and coyotes on occasion, but they tend to keep their distance. Wild turkeys, Whitetail Deer, owls of various types, hummingbirds, and squirrels are around all the time in the summer. Even with the occasional deer snacking on garden produce, we manage to live in peaceful coexistence with all the wildlife — except the mice.