After a little trial and error, the electric fence to keep the bears away from the beehives seems to be working. It’s questionable whether what’s left of the second hive will survive, but the larger hive remains healthy and intact. Here’s to it making it through the winter! 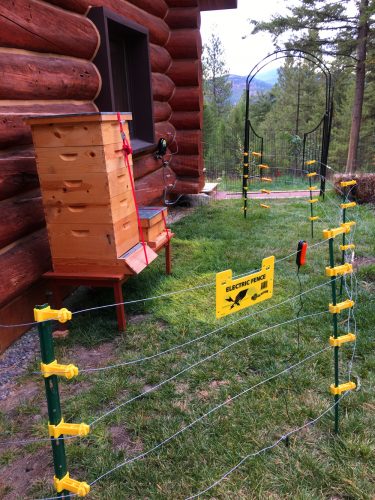 Installing the fence is relatively straightforward. For the way I set mine up, you need a 1-joule fence charger (I got one that would work plugged into an outlet, a solar charger, or a 12v battery), 4′ t-posts (however many to surround your hive spaced 3-4 feet apart), 14-gauge galvanized steel wire, 5″ offset insulators for t-posts, gate handles equal to the number of wires you’re stringing, and a 6′ grounding rod and clamp. I also got an “Electric Fence” sign and flexible tubing to protect the grounding rod wire.

Pound in your t-posts around the hives, and clip on the offset insulators to the t-posts. I placed the bottom insulators 8″ above the ground, and added insulators every 6 inches to the top of the post. Starting from the insulator farthest away from the charger location, string individual wires through the insulators. In my case, I attached the first to the side of the house.

Once you’ve strung the wires, clip the wires between the t-posts where you want your gate. Leave 6″ of wire from the t-post to tie the wire to the non-hook end of the gate handle. Tie the 6″ wire through the eyelet/non-hook side of the gate handle. From the other side, create a loop with the fence wire to hook the handle to. Make sure the wire remains sufficiently tight when the handle is hooked closed.

Then, from the side farthest from the charger, connect the top wire to the next below vertically so all are electrified. This is called an “all hot” configuration, meaning each of the wires is electrified. (If you live in a dry area, you can look up a “hot/ground” or “ground return” configuration in which some of the wires are live and the others are not).

Installing the 6′ grounding rod takes a bit of muscle. Pick a location away from the house so the electric charge doesn’t interfere with other household electric or telecommunications equipment. Mine is 30′ from the house. The soil around my house is hard and rocky, so I chose to pound the rod into the ground at a 45 degree angle. I started with a post pounder until the rod was set into the ground, and finished with a 6 lb. sledge hammer to pound it in the rest of the way. Leave a few inches above the ground to attach the grounding rod clamp.

Next I ran a wire from the hot terminal of the charger (usually red) to the top fence wire. This allows the current to run from the top wire across to the far side and down the vertical wires you created to electrify the whole fence. When the bear touches any of the wires, the bear’s body acts like a conductor completing the circuit between the grounding rod and the electrified wire, and it gets a strong shock. I wrapped raw bacon around a few wires to bait the bear into biting the wire and getting that first strong “learning” shock.

I added the “Electric Fence” sign and a clip-on live fence indicator that flashes when the fence is on and electrified. Finally, I plugged the charger into an outdoor 110v outlet. Everything worked as expected.

The first night the big bear came into the bee yard and got close to the fence, but didn’t touch it. He’s an old guy who might have run into electric fences before. The small female came in the early morning. She cased the fence line, and figured out she could squeeze under the wire nearest the house. That one was about 10″ from the ground, and her fur likely insulated her, so she was able to break in and get to the small hive.

Next day I installed an additional wire to divide the 10″ gap in half, and that seems to have done the trick. 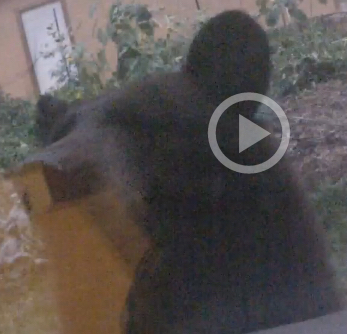 No bear break-ins in the last two nights. And glad to not have bears peeking in the windows! (Grabbed this image of the big black bear peeking in my living room window from a Nest Cam video, so it’s not playable)