Garage pantry and storage area is finally set up at Plant B, so now I have a good spot to put backup food supplies. Especially out here in the rurals, you never know how long you might be snowed in, have access to town cut off because a river decided to overflow its banks, or have to make do at home for some other unplanned reason. Best to be prepared.

My list has been tested and refined over the last seven or eight years. What’s on and what’s off the list boils down to answering:

Nutrition, tastiness, and ability to prepare over a flame (camp or propane stove, grill, or open fire) are also criteria. I consider these a given.

Food that’s fallen off the list includes white rice and instant potatoes (didn’t eat), crackers (go stale quickly), and canned fish and meats (not versatile).  There are a bunch of other items that fell off the list because they didn’t get eaten like canned soups (easier and tastier to make from scratch), beef jerky, miscellaneous candies, and canned vegetables. 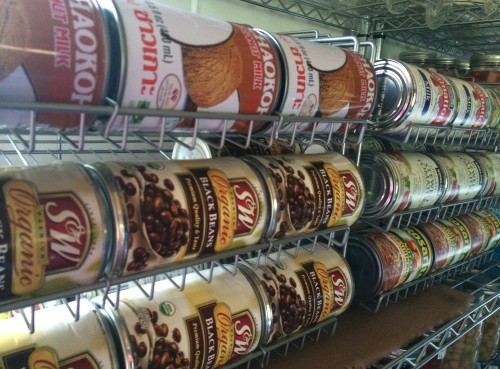 Here’s the food that’s remained on the list and why:

Virgin, unrefined coconut oil has a shelf life of up to five years — some say longer. It can be used in baking, frying, as a substitute for butter on bread, as a skin moisturizer, and a zillion other medicinal uses. Look it up. It tastes good, and while it has a slight hint of coconut essence, that doesn’t overpower the flavor of other foods.

I keep a bit of canola oil around for sauteeing and adding to beans and sauces when I want a break from the coconut oil. You could use safflower, soy, vegetable, or another all-purpose oil, too. I don’t have a strong preference as long as it doesn’t go rancid quickly and has a relatively high smoke point. 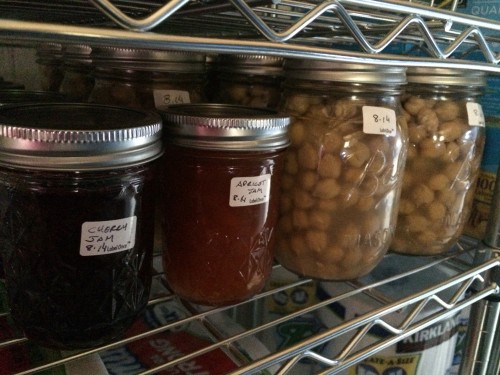 Great for chili and spaghetti sauce.

Easy to boil up a batch for dinner and toss with spaghetti sauce, a little oil and spices, or an improvised white cream sauce made with almond milk (see below).

When stored properly, rice lasts for years. Brown rice is a hearty complement to bean dishes, soups, and stews. It makes a tasty breakfast cereal as well.  Jasmati rice (cross between jasmine and basmati rice) is a great alternative when you want a lighter complement to your meal.

Blue Diamond unsweetened almond milk tastes best to me. If you get it in shelf stable packaging (not refrigerated) it will last about a year on the shelf. It should be refrigerated after opening if you can, but if not, try to keep it as cool as possible until gone. When it turns, you’ll taste it. It’s a good substitute for milk in cereal (or brown rice) and any other place you might want a bit of milk flavor. It can also be used to make a sauce with a little coconut oil and thickened with flour like you would a gravy. Season to taste.

If you want a creamier sauce than you can make with almond milk, or want something cream-like to put in your coffee, it’s worth keeping a half dozen cans of evaporated milk in your pantry. Note that while labels look similar in the supermarket,  evaporated milk is not the same as sweetened, condensed milk. 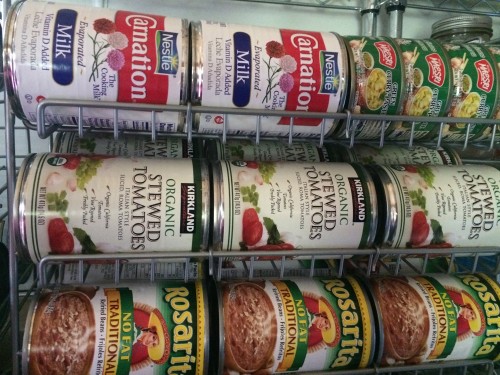 Myriad uses from baking to seasoning. But you already know that. Lasts forever. Buy in bulk.

I store bread flour and instant yeast in the freezer. If the power should go out for an extended time, they both can last up to a year unrefrigerated. Homemade bread is easy to make in a dutch oven — see this recipe. It can be made using coals from a campfire as well, though I recommend you research the process and give it a couple tries before a campfire is your only option.

Every once in a while something chocolate sounds good. I make brownies without eggs (only thing I’m allergic to) using 2 cups flour,  1 cup melted coconut oil, 2 cups sugar, 3/4 cup unsweetened cocoa, a teaspoon of baking powder, a teaspoon of salt, and a cup of water. Mix it together, bake around 350F for 20-30 minutes. Cocoa can also be combined with sugar and almond milk for a version of hot chocolate. 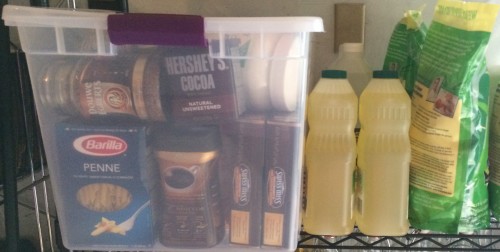 Another leavening agent that’s good to have on hand for baking. It’s also good for cleaning, brushing teeth, and as an antacid when mixed with water.

Great when you need to add a bit of acidity to a dish or dressing, and don’t have lemons handy. Also good for cleaning.

My go-tos (in addition to salt) are cayenne, cumin, and garlic powder. I also keep a large backup bottle of Tabasco sauce. I like things spicy. You’ll no doubt have your own tastes on this one. Stock what you use.

I’m a big fan of Thai curries with Jasmati rice. If fresh veggies and/or meat are available, they’re great to add to the mix. If not, garbanzo beans will do in a pinch.

Under normal circumstances, I prefer brewed coffee. However, instant lasts a lot longer and is easier to prepare. Tea is a welcome alternative.

That’s it. With those ingredients I can make bread, flour tortillas, dumplings, bean chili, a bunch of pasta dishes, brownies, hot cocoa, hot tea, iced tea, coffee, chocolate milk, a variety of rice and bean dishes, lentil stew, hot cereal with sugar and almond milk, among other recipes. If the garden is growing, there are veggies to add to the mix, along with whatever homemade jam, olives, dried fruit, and pickled vegetables are already in the pantry. We also keep a supply of meat in the freezer. While meat and fresh vegetables are nice to have, with the list above we would do fine without them for quite a while.

A note about water and fire: We have a well on the property that provides water via a hand pump if electricity goes out. If you don’t have a water source, I recommend backing up plenty of water as well. We have a propane stove, but if that should go out we also have a grill and campfire ring that will work in a pinch. A camp stove would also be a good backup. As long as you have a backup source of water and fire, the list above will keep you going for a long time, too.

One Reply to “storable food favorites”