Five weeks ago I decided to experiment with unrefrigerated cheese storage. I painted blocks of store bought cheddar and jack w/red cheese wax, tied them with butcher’s twine, and hung them to store in my shop/garage area. The shop stays reasonably cool even though we’ve had days in the 90s. Tonight I cut open one of the blocks of jack.

There was a tiny dry spot where the twine had cut into the wax enough to let a bit of moisture out. Other than that, the cheese experiment is a success at five weeks unrefrigerated storage. 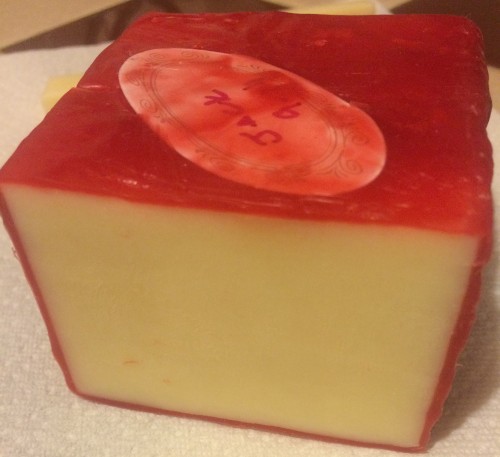 The cheese smelled right — a smidge sharper than the very mild store bought jack I originally waxed, in a good way. It tasted better than the original, too. Slightly more complex and a little more yellow than the creamy white jack of five weeks ago. We’ll see what happens over the coming year. So far I’m hopeful the shop environment will work for aging my homemade cheeses down the road as well.

Update #2: While traveling and away for three weeks this winter, a deer mouse took up residence in the shop and had a nice feast on one of the blocks of cheese. Apparently deer mice are great jumpers. This one jumped up on the hanging blocks, severed one of the strings, and had a bit of a snack once it was down on the floor.

Even though only one of the blocks were gnawed, I ended up tossing the whole batch. Around 40% of deer mice in Montana carry the Hanta virus, which can cause a deadly respiratory infection. I didn’t want to chance that the cheese might be contaminated from being climbed on by the mouse. In the future, I’ll make sure any stored cheese is well out of reach of critters.

(BTW, I caught the mouse in an electric zap trap. While I hate to kill anything, mice breed quickly and can cause expensive damage. I found this one’s nest on the engine block of my car. After catching the mouse, clearing the nest, and disinfecting the shop I haven’t seen a sign of any more. Hopefully it was the only one).