Honey is in good supply for my two hives that are thriving, so decided to harvest one frame of my Montana forest wildflower honey from the strongest hive.

The frame above is one of the foundationless frames I added to the hive. The girls did a beautiful job building it out! As a kid in coastal California my mom sometimes bought us honey in the comb.  One taste brought back memories. 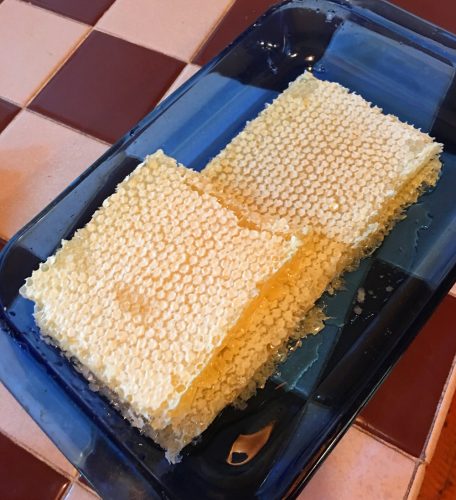 My bees forage from wildflowers and flowering trees in the surrounding forest — lupine, dandelion, St. John’s wort, purple thistle, and a bunch of other flowering plants I’ve yet to identify. They also gather nectar and pollen from the garden — broccoli flowers, nasturtium, sunflowers, chives, lavender, basil and rosemary flowers, among others. The resulting fresh honey is like nothing I’ve tasted. It’s sweet without being cloying, slightly herbacious, and evaporates on the tongue. 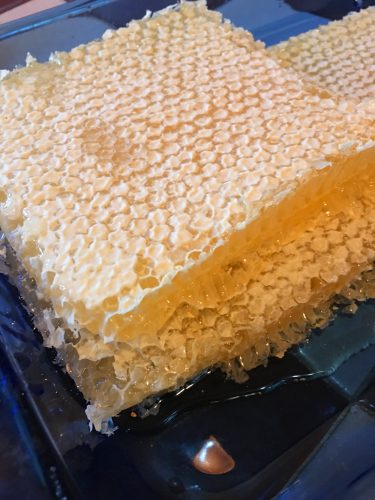 Received my very first bee sting harvesting the honey, too. Small price to pay. A bee got caught in the collar of my shoe. I felt a sharp pain for a couple of seconds. Other than that, no big deal. An hour later and the sting site is undetectable.

I’ll leave the girls the rest of the honey to get them through the winter, and focus on strengthening the two strong hives between now and winter. Hive #1 is declining in population despite two attempts to re-queen, and is a loss at this point. Next year I’d like to build up to 4 strong hives and cap it at that. Fingers crossed, Hives #2 & #3 will overwinter nicely!