Last time I made sauerkraut in 2014 I covered the jar with a cloth to let it ferment. One of the dicey parts of this method is it can allow in wild spores from the air as it’s fermenting. Sometimes those create mold on top of the mix and add their own flavors. That might be a good thing, or it might make the kraut taste a little funky. It’s still fine to eat. I didn’t care for the flavor last time, though. This year I’m taking a more controlled approach. 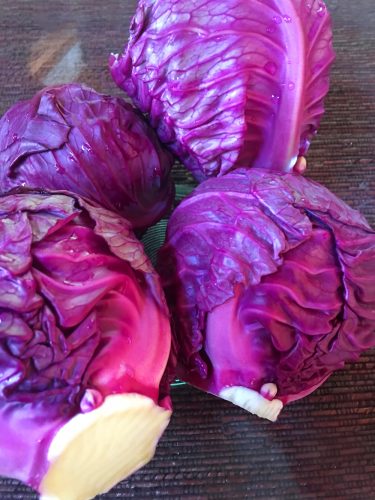 I’m starting with freshly harvested cabbage from my garden this round. I shredded the cabbage thinly like I did before, and ended up with about 4 pounds. I sprinkled 1.5 tablespoons of pickling salt over the shredded cabbage and massaged until the juices started to run. I wear sterile nitrile gloves for this part of the process to keep the mix and my hands clean. Optional, but nice to have.

This time I’m using an airlock for all my vegetable fermentations to keep unwanted air (and spores) out of the mix. I sterilized fermentation caps, airlocks, 1.5 pint wide-mouth mason jars, and  1/4 pint (4 oz.) mason jars with metal lids and rings. For this recipe I ended up needing two of each, so figure 2 pounds per 1.5 pint jar. 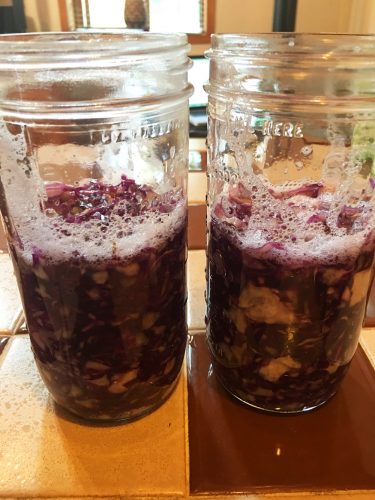 I divided the mix in half and added fennel seeds to one half to change things up a bit. It might look like there is too much mix to fit in the jars, but once you tamp it down the jars fit a lot. Fill each jar only to a little over half full to leave room for your  1/4 pint jar. 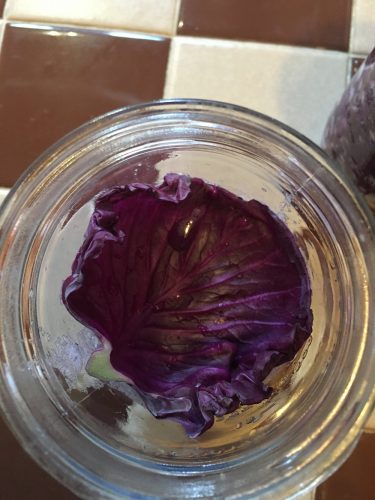 Put a whole cabbage leaf on top of the jarred mix, and the sealed and sterilized 1/2 pint jar on top of that.

The  1/4 pint jar will weight the mix and keep it submerged as it ferments. Finally, put on the sterilized fermentation cap with the airlock. Put a little water in the dual chambers of the airlock to the fill mark and cap the airlock. 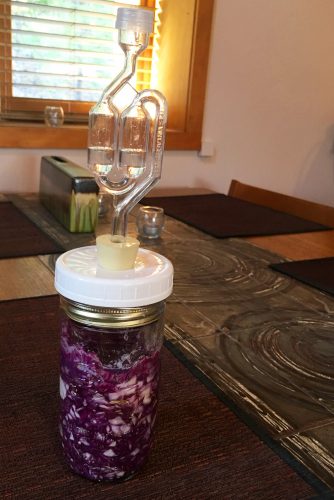 Keep the jars in the dark fermenting for 4 weeks — covered or in a dark cabinet — checking occasionally to make sure the mix remains submerged. If it isn’t, you might need to add additional weight inside the  1/4 pint jar (marbles, small river rocks that florists use work well). After 4 weeks if it tastes done to you, you can cap with a closed cap and place in the refrigerator for up to 6 months.

Checked the progress at the end of week 4. The top inch or so of the cabbage looked a little brown, though the entire batch remained submerged in the brine. I opened the jar for a quick smell. It smelled a bit sweetish like cooked cabbage, with no off odors.

I removed the top cabbage leaf and pushed the brownish cabbage to the side to get to the purplish layer, and took a small taste. Awful — had to spit it out and rinse my mouth immediately. The tiny taste I had was very bitter, salty, and mushy. It was not sour at all, which indicates to me the fermentation had stalled.

I’d kept it at around 72F for the first few weeks, and then moved it to the shop, which stays around 60F. That probably was too low a temperature to keep the fermentation going. Even before I moved it, though, I didn’t see any evidence of bubbling so fermentation may have never gotten started at all. I ended up tossing the whole batch, once again. It may be a while before I try making sauerkraut again.

One Reply to “sauerkraut 2nd try”