the bears and the bees

Lesson learned — if you live in bear country, install a high-voltage electric fence around your bee hives even if you’ve heard bears aren’t a problem in your immediate area. They can smell honey a mile away!

I woke early one morning to find my weakest hive had been taken down over night. A small black bear came back just before sunup and I chased it off.

I was leaving for a work trip that day, so did what I could with the time and materials on hand to secure the remaining 2 hives. 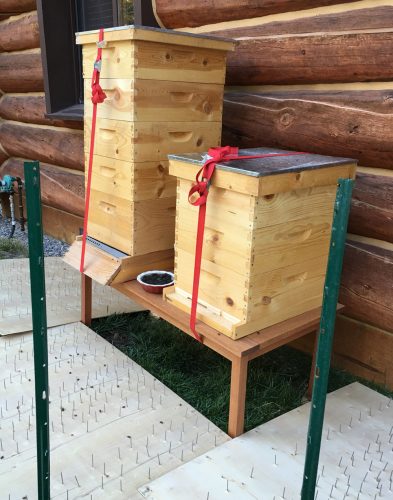 I moved them inside the 8′ deer fence around my garden near a motion detector light, strapped the hives to the table stand, created a 4′ perimeter bed of nails, and pounded in t-posts so the beds of nails couldn’t be moved out of the way easily. I also trained a Nest cam out the window so I’d be alerted if there was any motion around the hives. Not an ideal setup, but the best I could do on short notice.

The setup worked for a few days until a bigger bear got in under the gate, knocked out a t-post, moved one bed of nails, and toppled the smaller hive by pulling the bottom board off the side of the table. It got a couple frames of honey. Later that night it came back again and I chased it off before it could do more damage.

I’ve heard mixed messages about how effective installing an electric fence is after the bears find honey. I will likely have to move the hives far from where they are now in either case — not so keen on having bears hanging around so near the house, and the new location needs to be far enough away from where the bears consider honey territory.

One Reply to “the bears and the bees”