Yesterday afternoon about a half dozen or so of these large, fluffy, yellow and black flying insects with clear wings were feeding on the lilacs. First thought it might be a bumblebee queen, but it didn’t make sense that there would be so many in one place.

I asked some fellow beekeepers. Turns out it’s not a bee, but a moth — Hemaris difinis to be exact. Some call it the “flying lobster” due to its flat, splayed tail. It’s also known as a “hummingbird moth” (pic below from erie.wbu.com). Unlike other moths, these lose the scales on their wings that give other moths their wing color so the wings appear mostly clear — like a bee’s. 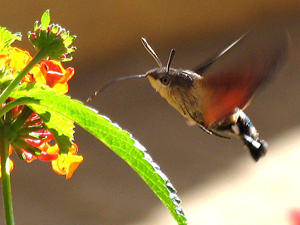