Monday’s regularly scheduled program got derailed this morning as I walked outside just in time to see one of my hives start to swarm. First there was a lot of activity swirling in front of the hive. I thought maybe they were being invaded by another colony of bees. Then a large tornado of bees ascended toward the sky and started making their way to the treeline at the side of the driveway.

Within several minutes they started coalescing on a branch about 10 feet up, and I knew that have had swarmed. It was a dramatic sight.

I’d added a new medium super with all foundationless frames when the bottom deep hive box was about 3/4 full. Since I was transitioning from a deep hive box to a medium, I couldn’t place a deep frame in the new box to encourage them to build there. They had built only a little comb on one of the foundationless frames, so perhaps they weren’t confident how to create comb that way. In the second hive I’d tried alternating frames with and without foundation, and they’ve been building out both types of frames successfully. 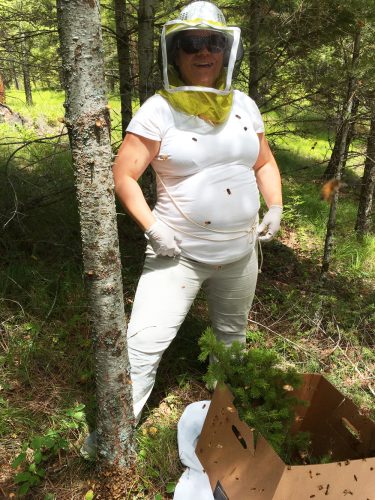 With no experience capturing swarms and with the swarm being high up in the tree, I called one of our local apiaries to see if they could help me rehome my runaway bees. A cheerful Lisa arrived an hour later, explaining she’d do the best she could being seven months pregnant and maybe a little less mobile than usual. I was concerned, but she said it should be fine, and this would be baby number 15 for her. That constitutes some superhero rock star street cred in my book.

Lisa climbed the ladder and lopped off the branch with the bees into a box I was holding high over my head. Some of the bees landed in the box with the branch while others clumped on the ground. The queen was in the box, though, so it didn’t take too long for the others to start to join her. 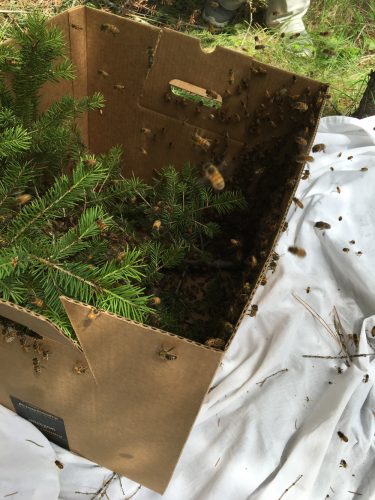 I carried the box of bees to the new hive and we shook them on top. The few stragglers found their way trailing up the branch and into the hive soon thereafter. 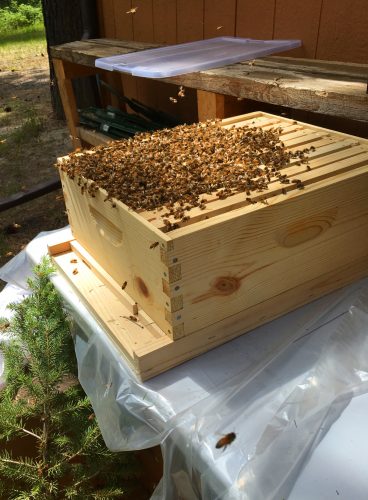 We added a temporary cover since I didn’t have an extra handy, and the bees started making themselves at home.

By afternoon they were coming and going, collecting nectar and pollen, just like the other hives.

The hive the bees split from is still fairly full of bees. I alternated frames with and without foundation in that one as well in hopes they’ll figure out how to build new comb with some boundaries.

The left-behind hive should be hatching a new queen soon. There are lots of drones around, which bodes well for getting her to mate when she’s airborne. I should know in a couple of weeks whether the hive’s requeening efforts have been a success. All very exciting stuff for this new beekeeper!