Last fall I hauled three truckloads of maple prunings to the dump. They would have made excellent mulch. I see no such waste in the future with the arrival of the Brushmaster. With 10 acres of trees that need tending, and lots of twigs, branches, leaves, pine needles, and woody vegetable stems from the garden, a chipper/shredder is likely a wise investment. 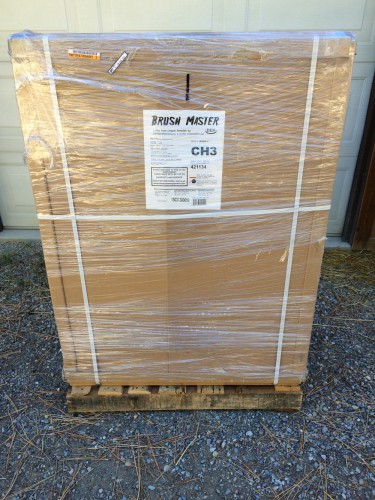 It was difficult to find enough info online to decide which would be the best chipper/shredder for what I need. All had major pros and cons. In the end, I decided to go with a light commercial grade so I’d have enough power to take care of most chipping/shredding tasks I imagined I’d encounter. Home Depot had the Brushmaster on sale so that sealed it. 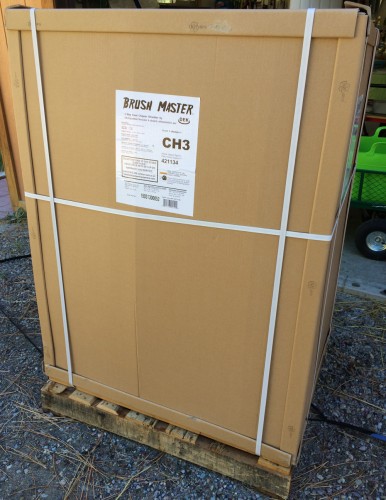 The safety gear might do in a pinch, but it’s all cheaply made. Better to use or get your own. The rest of the parts look sturdy and well-constructed. The rubber gasket for the bottom of the leaf chute arrived unglued, but that didn’t matter much for the assembly. 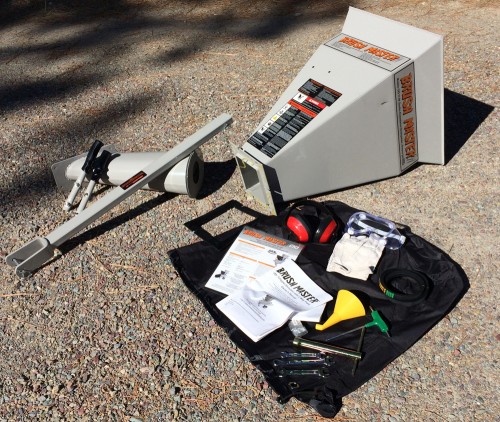 I cut the box open to reveal the rest of the chipper. The only assembly needed was to attach the two chutes and the handles. If you want to attach the tow bar as well, it’s a standard bolt that goes through the holes secured with a cotter pin like most tow bars. I don’t anticipate needing to tow it, so I put the tow bar in storage. 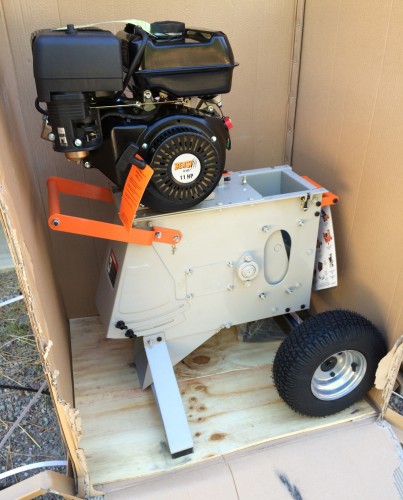 The assembly guide recommends disconnecting the spark plug wire before assembling. I looked at the parts diagram in the manual, but didn’t see anything labeled “spark plug” or “spark plug wire.”

It’s my first time at this particular rodeo dealing with a large piece of equipment, and even though I know what a spark plug wire looks like in a car engine, nothing on this one looked familiar. I ended up searching YouTube videos on how to change a spark plug on a DEK engine (which the Brushmaster has according to the manual). That solved the mystery.

Here’s what the spark plug wire looks like attached: 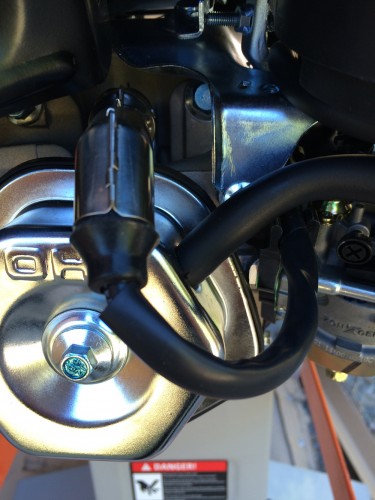 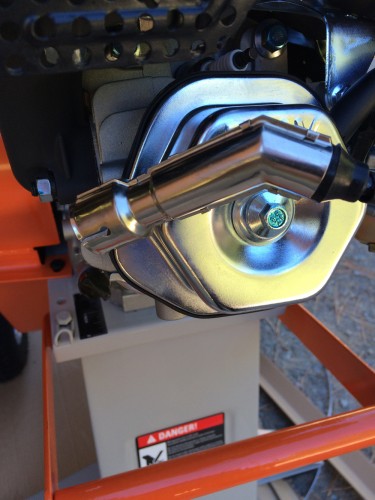 Simple now that I know what to look for.

I attached the handles to the large leaf chute. The wrenches that came with the box are hard to work with. Instead I used a socket wrench with a short and long reach (just pop the right-sized socket on the end you want to use) — makes tightening the nuts at odd angles much easier. 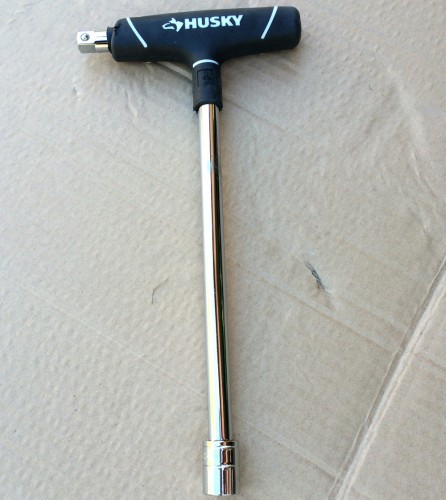 Once the handles were attached to the large leaf chute, I lined up the rubber gasket that had come unglued with the bolt holes on the machine and lined up the chute on top of it to match. Once the bolts and nuts were in place, the gasket was secure.

Finally, I attached the branch chute/feeder. The fixed bolts didn’t line up perfectly to the bolt holes on the chute, so I had to use a rubber mallet and coax the chute to the right position once I had 3 out of the 4 bolts inserted part-way through the hole. In the end, it lined up fine and I was able to screw down the nuts to attach. 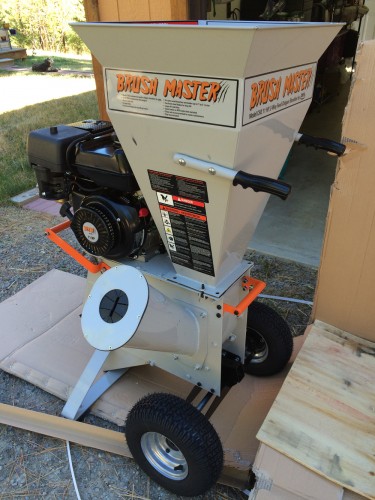 Even with the wheels and handle, this is a heavy machine for me as a 5’4″ woman to move. I had to step on the bottom bar while pulling down on the handles with some effort to get it to roll. In addition to being heavy (~250 lbs.), it’s pretty tippy when on the roll. I could imagine having it fall on top of me if I were going up an incline.

I just needed to roll it into the shop, however, so that I could handle.  I’ll  have plenty of help next week when it’s time to start chipping and mulching. I’ll post an update once I’ve seen it in action. 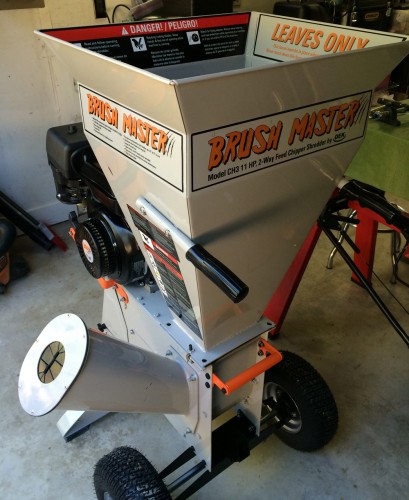 The Brushmaster took three guys used to working with heavy equipment about 20 minutes to start it up. They tried loosening the gas cap, playing with the choke and throttle in various positions, and repeatedly pulling the start cord. Finally the engine caught. In the mean time, I called the manufacturer. Aside from what my guys were already trying, she suggested disconnecting the oil sensor, and emailed me a photo with instructions on how to do just that. By the time I got the email, though, we were up and running. 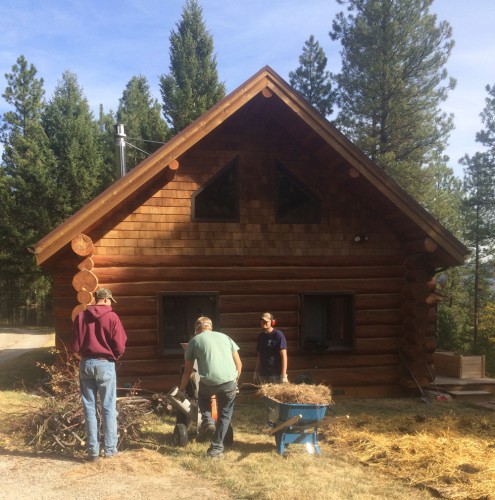 Once the machine was running, it worked like a charm. It effortlessly turned everything from pine needles, dried tomato and pepper stalks, twigs and 3″ branches into fine mulch. I heard from my crew that new machines are often hard to start, but once they’ve had their first run the next time starting is much easier.